The Tulip Festival Steering Committee has announced the annual Night Show musical production for May 18-21, 2016, as “West Side Story.”

A musical adaptation of Shakespeare’s “Romeo and Juliet,” the story takes place in the streets of New York City, where two young people fall in love and face challenging social conditions beyond their control. The musical features well-known songs including “Tonight,” “Somewhere,” and “I Feel Pretty.”

“The show is full of excitement to the end – and in the end, we find that love wins.”

Vande Griend is joined in the leadership of the 2016 Night Show by Tom Hydeen, music director; Becky Donahue, choreographer; and Victoria Karssen, producer.

The musical was performed previously during Tulip Festival in 1994, and Vande Griend looks forward to bringing it back to the Night Show stage. “It’s a show of great magnitude that brings a challenge to the actors and directors,” he says.

Tickets for the Night Show are on sale for $20 each the Orange City Tulip Festival office.

“West Side Story”  is based on a conception of Jerome Robbins. Book by Arthur Laurents. Music by Leonard Bernstein. Lyrics by Stephen Sondheim. Entire original production directed and choreographed by Jerome Robbins. Originally produced on Broadway by Robert E. Griffith and Harold S. Prince by arrangement with Roger L. Stevens. 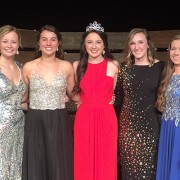 A senior at Unity Christian High School in Orange City, Grossmann is the daughter of Jonathan and Glenda Grossmann.

A pageant was held for the public in the evening. Each of the candidates answered questions on various topics and gave an individual presentation. Grossmann was crowned queen as a conclusion to the evening.

Grossmann and her court will serve as ambassadors for the Orange City Tulip Festival as they travel in the spring, making several media and public appearances