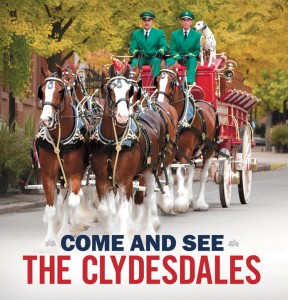 The world-famous Clydesdales will appear in the afternoon parades on Thursday, May 14 and Saturday, May 16 during the 75th annual Orange City Tulip Festival.

The world-famous Budweiser Clydesdales, the symbol of quality and tradition for Anheuser-Busch since 1933, are scheduled to make several appearances in the area beginning on 5/14/2015, including two at the Tulip Festival in conjunction with the parade.

The Clydesdales’ appearance in Orange City is one of hundreds made annually by the traveling hitches.  Canadians of Scottish descent brought the first Clydesdales to America in the mid-1800’s.  Today, the giant draft horses are used primarily for breeding and show.

Horses chosen for the Budweiser Clydesdale hitch must be at least three years of age, stand approximately 18 hands – or six feet – at the shoulder, weigh an average of 2,000 pounds, must be bay in color, have four white legs, and a blaze of white on the face and black mane and tail.  A gentle temperament is very important as hitch horses meet millions of people each year.

A single Clydesdale hitch horse will consume as much as 20-25 quarts of feed, 40-50 pounds of hay and 30 gallons of water per day.

Each hitch travels with a Dalmatian.  In the early days of brewing, Dalmatians were bred and trained to protect the horses and guard the wagon when the driver went inside to make deliveries.

The Budweiser Clydesdales can be viewed at the Anheuser-Busch breweries in St. Louis, Mo.; Merrimack, N.H.; and Ft. Collins, Colo.  They also may be viewed at Grant’s Farm in St. Louis and at Warm Springs Ranch, the 300-plus acre Clydesdale breeding farm located near Boonville, Mo.