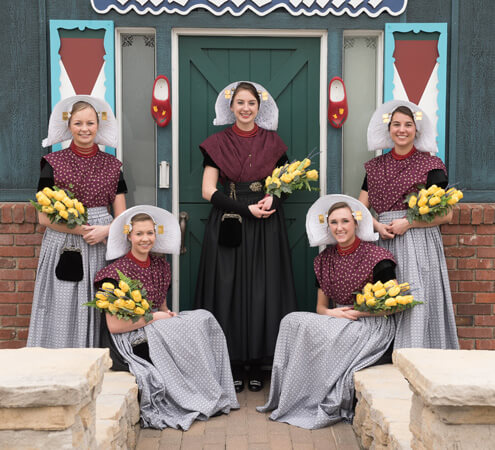 Queen Ava Grossmann and her Court will wear the authentic 1880s Protestant dress from South Beveland for the 2016 Tulip Festival. Image courtesy of Generations – Portraiture and Weddings.

The annual Orange City Tulip Festival Extravaganza was held Wednesday, March 16, at Prairie Winds Event Center. The event featured a luncheon and program during which the costumes for the 2016 Tulip Queen and Court were revealed and the 2016 parade marshal was introduced.

Queen Ava and her Court will wear the authentic 1880s Protestant dress from South Beveland for this year’s festival. Queen Ava is wearing the formal dress and her Court is wearing the informal dress. This is the first time the informal costume has been introduced at Tulip Festival, as the Tulip Courts of 1981 and 1993 wore the formal South Beveland costumes.

The Court’s costume is made of a black woolen fabric, while Queen Ava’s is made from a black flowered brocade fabric.  Queen Ava’s bib, or “buek” in Dutch, is made of a mulberry colored floral fabric, and the Court’s of a floral cotton fabric. The bib is covered by a scarf, or “doek,” made of the same fabric. 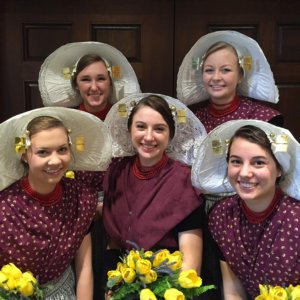 The costume’s skirts are covered by hand-shirred aprons, with Queen Ava’s apron made of a black woolen fabric and the Court’s made of a black and white striped cotton fabric. Queen Ava’s costume also includes a petticoat made of plain color flannel.

All five members of the Tulip Court wear an ear iron, or “oorijzer,” made of jewelry’s brass. A white under cap is worn over the ear iron. The most prominent piece of the hat is a rounded “hul,” held in place by pearl hat pins. Queen Ava’s is made of a white lace fabric and her Court’s are made from a white eyelet fabric.  The hats are also adorned with two large, gold-head hat pins.

The 2016 Tulip Court also presented their traveling road show titled “Tournament of Tulips” for the first time. The road show, which the festival royalty wrote and will present to various organizations, schools and residential care facilities this spring,  tells of the events and attractions at Tulip Festival and gives a detailed overview of their South Beveland costumes.