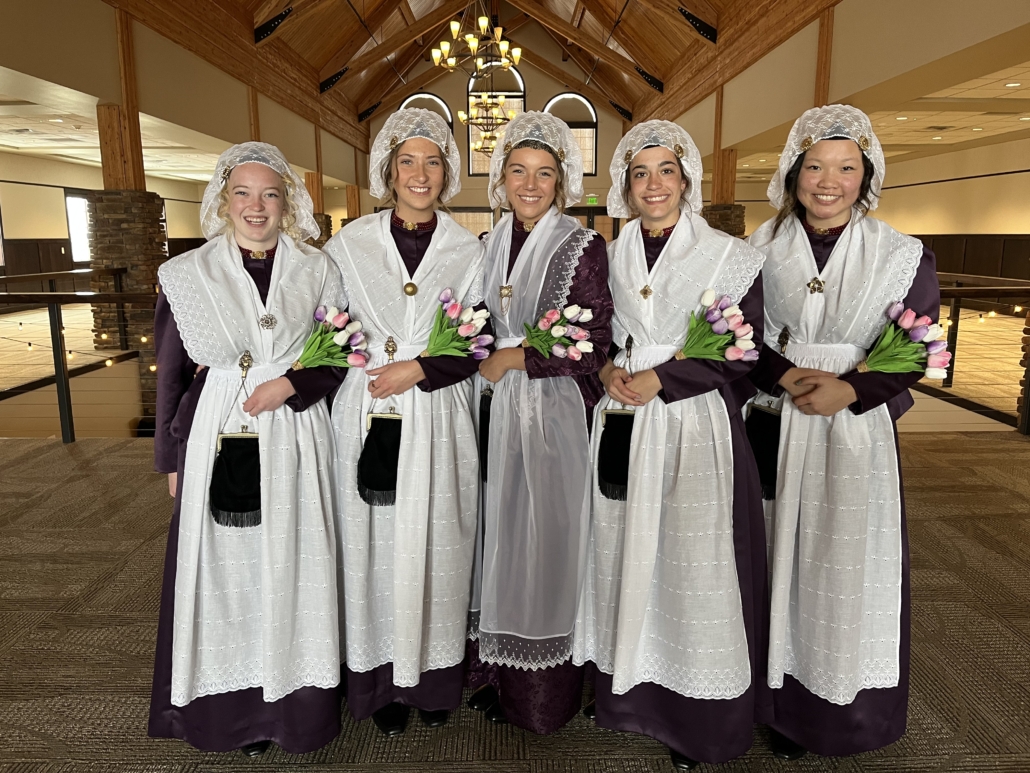 The annual Orange City Tulip Festival Extravaganza was held Wednesday, March 23, at Prairie Winds Event Center. The event featured a luncheon and program during which the costumes for the 2022 Tulip Queen and Court were revealed and the 2022 parade marshal was introduced.

The 2022 Tulip Court is proud to be wearing the authentic costume from Drenthe. Drenthe is located in the northeast part of The Netherlands. The costume represents the typical Sunday and special occasion dress of the 1800s. The jackets and skirts are constructed of plum-colored satin – solid satin for the court and a jacquard-weave satin for Queen Naomi. The jackets have intricate details with several folds and tucks, and a short, gathered peplum.

The skirts include a wide tuck just below the waistline. The narrow white apron is shirred into the waistband and trimmed with wide lace. A lace-trimmed triangular scarf is wrapped around the neck and secured with a personal brooch in the front. A black velvet purse, trimmed with beaded-glass fringe, hangs from the waist. The hats consist of four separate pieces. A white undercap is worn close to the head, then a black half-cap is worn close to the forehead and tied in the back. A stiff gold dome called a casque is placed over this, and a delicate white lace cap is worn on top of the casque. Large gold knobs adorn the sides of the hats. Queen Naomi’s hat also includes a decorative forehead iron as added adornment. Each court member is wearing a traditional garnet beaded necklace tied with a gold clasp in the front.